BACK TO ALL
NEWS

A Seal of Excellence: ID21 Scores at the Design Excellence Awards (DEA) 2021 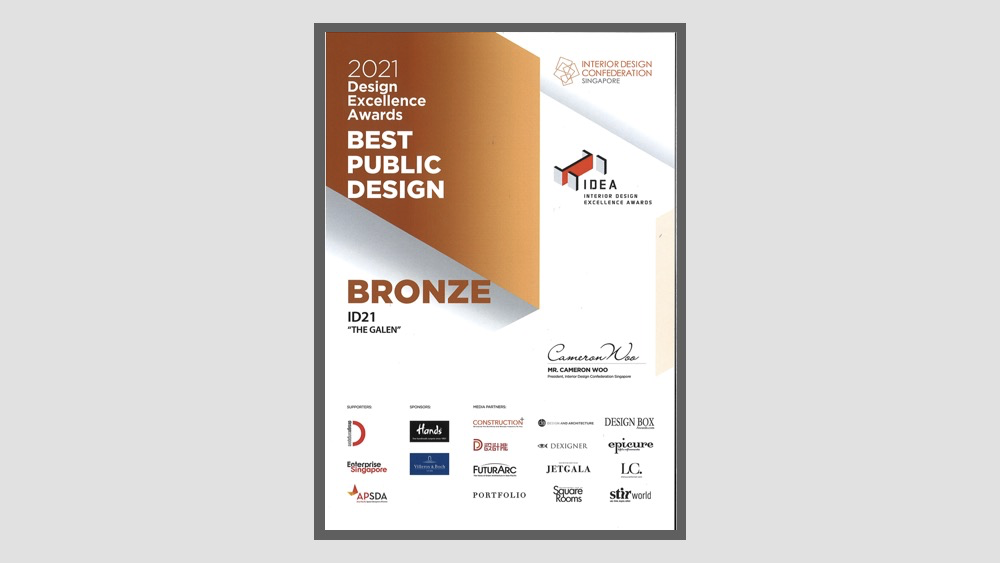 We are honoured to share that ID21 has clinched the Bronze Award for ‘Best Public Design’ at the 8th Design Excellence Awards (DEA) for The Galen in Singapore.

Our Winning Project – The Galen

The Galen is located within the lush Science Park, an area designed to house chemical, life sciences and IT companies. Beyond the traditional entryway or waiting area, we have reimagined its lobby as a place for people to socialise, make plans and prepare for the workday.

Driven by a people-centric approach, we intentionally capitalised on the location’s greatest asset: the views of the greenery. Rather than allowing the building to remain insular and self-contained, we reconfigured the lobby layout such that it seamlessly blends with the Singapore Science Park streetscape, affording users and street pedestrians opportunities for interaction.

In their press release, Mr Cameron Woo, President of Interior Design Confederation Singapore said, “The Design Excellence Awards 2021 has become an international brand of excellence in the world of interior design. In 2021, we have seen a tremendous growth in the quantity of submissions. IDCS received entries from China, Indonesia, Hong Kong, Italy, Japan, Malaysia, Philippines, Singapore, South Korea, Taiwan and Thailand, all of which displayed significant elevation in the quality and standards of Interior & Spatial Design.”

We would like to say a huge thank you to our ID21 team who has seen this project through from its conceptualisation to execution, as well as to express our gratitude to our partner, CapitaLand, without whom this collaboration would not have been possible.

About the Design Excellence Awards

The Design Excellence Awards aims to be a platform that honours the Interior Design industry and its institutional landscapes with the highest accolades, not only in Singapore but in the region. DEA will promote and acknowledge individuals and firms that has contributed significantly in good design thinking and visualising the future of spatial design.